Project 21: Teachers for the Twenty-First Century

Project 21 was the most significant undertaking of the BTE during the period 1985-1988, with the 1988 Annual Report noting that Project 21 served as the culmination of the 17 years of the BTE’s existence (BTR, 1988, p. 6). Between February 1985 and mid-1987, the Board undertook the project which included reviewing teacher education and teacher registration, analysing social and educational trends, and considering the implications for teachers teaching in the latter 20th and early 21st centuries. The focus of the project was ensuring the continuing professional standing of teachers in the years ahead.

During 1985 nine working parties met, with the outcomes of their deliberations resulting in a Project 21 Discussion Paper. In order to provide opportunities for all stakeholders to respond to the discussion paper, public meetings were held in 11 locations across the state (Cairns, Mt Isa, Townsville, Mackay, Rockhampton, Bundaberg, Maryborough, Nambour, Toowoomba, Ipswich, Gold Coast) and four meetings were held in Brisbane. These meetings were led by Board members as well as staff of the Board of Teacher Education. All stakeholders were invited to make written submissions in response to the Discussion Paper. 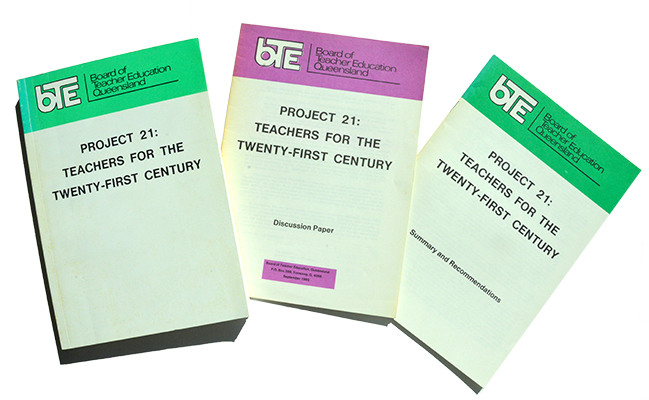 In 1986, an 8-page leaflet (Project 21: Teachers for the Twenty-First Century - Invitation for Further Comment) was circulated to every teacher in the State, with an invitation to submit feedback. A further round of working party meetings was held to consider all feedback to this time. The final report was completed in mid-1987 and again, copies were widely distributed.

Project 21’s recommendations with respect to selection and recruitment emphasised that selection into preservice teacher education courses should be based on some measure of personal attribute and not solely reliant on the TE (Tertiary Entrance) score (as it was at the time). It was suggested that these measures would broaden the criteria for entry and also make teaching a more attractive career choice for school leavers.

The Board conceptualised initial teacher education as a three-phase program:

The Board also outlined broad principles which should guide the planning and implementation of initial teacher education programs. The Project 21 report detailed components of such programs within a framework of content and processes.

It also acknowledged the benefits which would ensue from a closer collaboration between employing authorities, teachers and teacher educators in the overall development of the profession.

The program guidelines proffered, and the suggestions for a greater collaboration, were proposed to deliver improvements to the professional experience components of initial teacher education. These improvements were suggested to be around standards, balance, theory-practice integration, and sequence of professional experience within the initial teacher education program.

The Project 21 meetings and submissions endorsed the importance of professional development for teachers, and for teacher educators. The report provided suggestions as to how these opportunities could be supported, although it emphasised that teachers as professionals had responsibility for their own growth.

During 1985, 87 applications were received from persons whose qualifications were obtained from overseas. The majority of these were from the UK, US, New Zealand, Canada, Papua New Guinea and South Africa (BTE, 1985). The Board had in place a series of processes to provide assessments. By 1988, the number of applications received in the year had increased to 524, and these were from a larger number of countries (BTE, 1988). 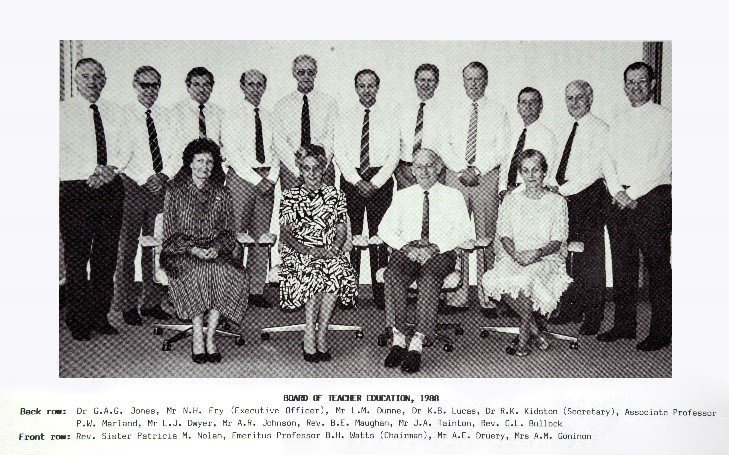 The final Project 21 Report was discussed at two seminars in late 1987. While the report contained some matters with which there was considerable disagreement, the Board chose to focus on less controversial recommendations during 1988. Working parties focusing on selection for entry into teacher education, the image of teaching as a profession, implications of school curriculum and organisational change for teacher education, and the in-service Bachelor of Education program were formed to advise the Board on Project 21’s recommendations.

An additional focus area was the provision of teaching experience in pre-service teacher education and the Board’s Teacher Education Review Committee served as the working party for this issue.

As will be discussed when reviewing the 1990s, Project 21 was prescient as major changes to tertiary education were about to be operationalised following Federal Government reforms heralded by the then Education Minister, John Dawkins (Croucher et al., 2013).

As the Board of Teacher Registration came into being on 6 February 1989, the 1988 Annual Report was the final one for the Board of Teacher Education. This report summarised the work of the Board since 1971, documenting the development and refinement of the system of teacher registration, with changes and recommendations with respect to minimum periods of accredited pre-service teacher education, and developments for teachers who had been away from the profession.

The 1988 Annual Report also summarised the substantial work which had been undertaken in the accreditation of teacher education courses.

Each of the reports from the 1980s documented the increasing numbers of teachers who were voluntarily upgrading their qualifications. At the end of 1988, 54,247 teachers were on the register. By then, “…82 percent of teachers held three-year and four-year qualifications, compared with 51 percent in 1979 and 75 percent in 1984” (BTE, 1988, p. 2). These data directly reflect the work of the BTE in advocating for, and supporting, the profession.

Board of Teacher Education. (1987). Project 21: Teachers for the Twenty-First Century Author.